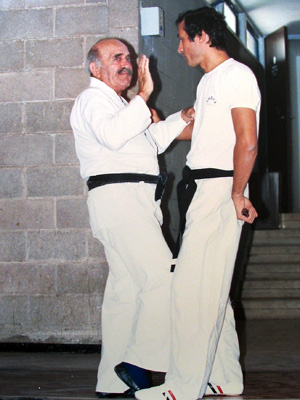 Imi Sde-Or (formerly, Imrich Lichtenfeld), founder of Krav Maga, was born in 1910 in Hungary and grew up in Bratislava, Slovakia. In a home where sports, law and Central European education were equally respected and encouraged, it was no surprise when Imi became an award-winning athlete, wrestler and boxer.

In the mid-1930s, however, Imi felt he had to take his fighting skills to the streets to protect Jewish neighborhoods from the growing numbers of fascist and anti-Semitic thugs who swarmed in Bratislava at the time. Having become a thorn in the side of the equally anti-Semitic local authorities, Imi left his home, family and friends in 1940 on the last refugee ship to escape Europe and the tightening Nazi noose.

After making his way to Palestine, Imi was quickly welcomed into Israel’s pre-state Hagana military organization. With his hard-won experience and skills as a fighter, Imi instructed Hagana troops in the practical lessons of hand-to-hand combat he had internalized and ultimately systematized. In 1948, when the State of Israel was founded, Imi became the Israel Defense Force’s first Chief Instructor for Physical Fitness and Krav Maga. He served his country in uniform for 20 years, during which he further developed and refined his unique self-defense and combat system.

After retiring from the army, Imi felt that Krav Maga could and should be adapted to meet the self-defense needs of civilians – men, women and children. Starting with just two training centers in Israel, within a decade his closest assistant – Eyal Yanilov, had established Krav Maga schools around the world through which he could share Imi’s self-defense methods, values and philosophy. No matter how, where and whom he taught, Imi always took great care to promote his universal principles: respect for one’s fellow, avoidance of undue or unjustified use of force, modesty, peace-loving conduct, and strict adherence to fair play.

Until his very last days, at over eighty-seven years of age, Imi continued to develop Krav Maga techniques, concepts and instructional methods with the devoted assistance of his closest student, Eyal Yanilov.