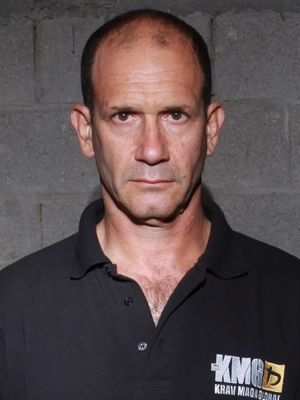 Eyal Yanilov began practicing Krav Maga in 1974, at the age of 15, under the personal tutelage of the system’s founder, Imi Sde-Or. Early on, he showed extraordinary talent as a student, as well as an instructor.

Recruited by Grandmaster Imi Sde-Or to train Krav Maga instructors and high-level students, Eyal eventually became the Grandmaster’s closest student and assistant. He is the only individual to whom Imi personally awarded both the Founder’s Diploma of Excellence and the then-unprecedented rank of Expert Level 8 – the highest rank in Krav Maga.

Together, Imi and Eyal wrote a series of books laying out the principles of the Krav Maga system in an accessible format, aimed at the civilian sector. Soon after, as head of the Israeli Krav Maga Association’s professional committee, Eyal created a new curriculum for Krav Maga, and transformed it into an organized, formal system built on principles of action and unique instructional methods. Alongside efforts to spread the discipline of Krav Maga among the general public, Eyal was also training anti-terrorist units in Israel according to the principles of combat as expressed in Krav Maga.

Eventually, Eyal traveled abroad and began to teach the system in many countries around the world. In the United States and Europe, Eyal taught Krav Maga to special military and law enforcement units, as well as to civilians. In order to manage the challenge of making Krav Maga truly international, Eyal founded an international Krav Maga federation and served as its president, under the tutelage and with the support of Grandmaster Imi. In practice, Eyal has personally trained all of the world’s first-generation Krav Maga instructors.

Since Imi’s death in 1998, Eyal has taken upon himself the responsibility of leading the continuing development of Krav Maga. On 2010 he established KMG – Krav Maga Global. Eyal continues to train instructors and staff all over the world, and has created a global infrastructure for disseminating the system. At present, under Eyal’s personal supervision, a team of elite instructors – The KMG Global Team – is bringing Krav Maga to a wide and growing array of countries.

In addition to the many civilians training in Krav Maga centers, military and police special forces from around the world have adopted Krav Maga – as taught by Eyal and his team – as their preferred combat fighting system.

While harnessing decades of practical experience from around the world, Eyal Yanilov’s Krav Maga Global is proud to preserve and promote the authentic mental, moral and professional path outlined by Krav Maga’s founder, Imi Sde-Or.